Sean Caulfield Was Born In England & Immigrated To South Africa With His Parents At The Age Of Two.

He showed a keen interest in art from an early age and excelled at high school where he painted landscapes, seascapes, portraits and abstracts in oils and acrylics. Upon matriculating at Sea Point Boys High School he received an award for excellence in art. His passion for being creative and talent was recognized and encouraged by the late Christian Prosser, who later became his mentor. Mr. Prosser offered to teach Sean everything he knew, refusing payment for his tuition. For the last three years of his life he guided Sean through all the finer techniques of painting. He became a great inspiration to Sean, who still holds a deep respect and appreciation for his expert guidance. 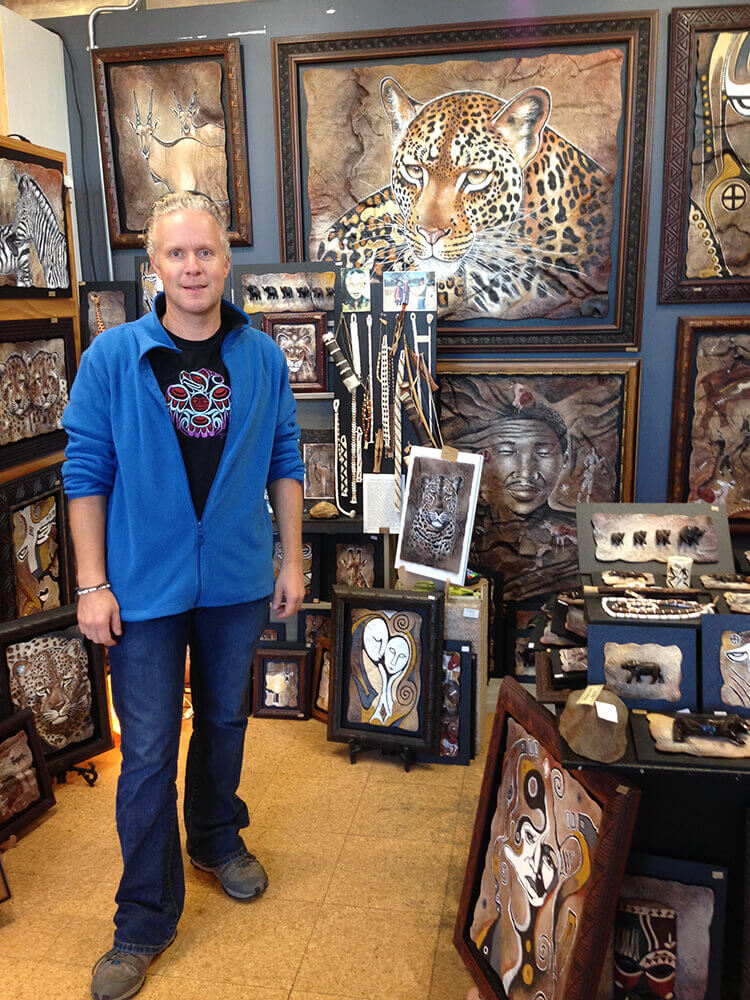 Sean Came Up With The Idea

Of painting on a manufactured rock surface whilst working for Duncan Temple-Forbes, his Godfather, where he learnt how to make rock water features. By compressing actual rock aggregate (stone granules) into resin and then casting it into a mould taken directly from the living rock of the local mountains he creates the special moulded rock canvases for his unique works of art.

within his technique Sean has developed over the years he has been inspired to capture the delicate shapes, textures and colours of the ancient rock art of Southern Africa. By using oxides, oils and solvents he gives his modern style of rock art a faded rustic appearance. Sean has made an extensive study of rock art paintings in their natural state throughout the mountainous regions of Southern Africa, where he has also visited the rock art sites themselves and he has researched the meaning of the rock art through various sources of literature. 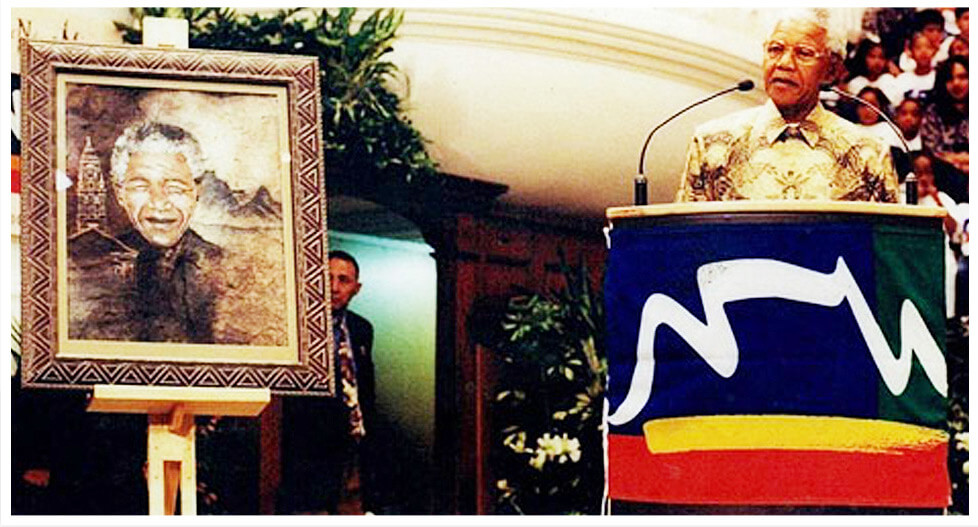 In Sean’s art on his rock canvas he also draws inspiration from Africa and its diversity, painting semi abstract sometimes mystical wildlife scenes and does portraiture of the African tribal peoples fused with Africa and its art, leaving the rock backdrop to give it that African feel. Sean has undertaken numerous commissions, including a portrait of Nelson Mandela, which Was presented to the president in 1997 to commemorate “Freeman of the city of Cape Town
Using his unique rock moulding technique, he has also undertaken ” rock feature and cave building ” and has coordinated the design and construction of a 300 square meter cave inside ” Museum Africa” – Johannesburg, as well as a 100 square meter replica of the Cango Caves, in Oudtshoorn.

in South Africa since 1990, and internationally in the U.S.A Australia, Switzerland, Germany and United Kingdom, He is a gallery owner in Cape Town’s Waterfront since 1996 and this is where he exhibits his rock art and you might be lucky to catch him demonstrating his techniques.
Sean has been offering visitors to the Cape an opportunity’ to own and enjoy a unique piece of Africa for more than 15 years. He now wishes to extend that opportunity to customers as well as dealers throughout the world. 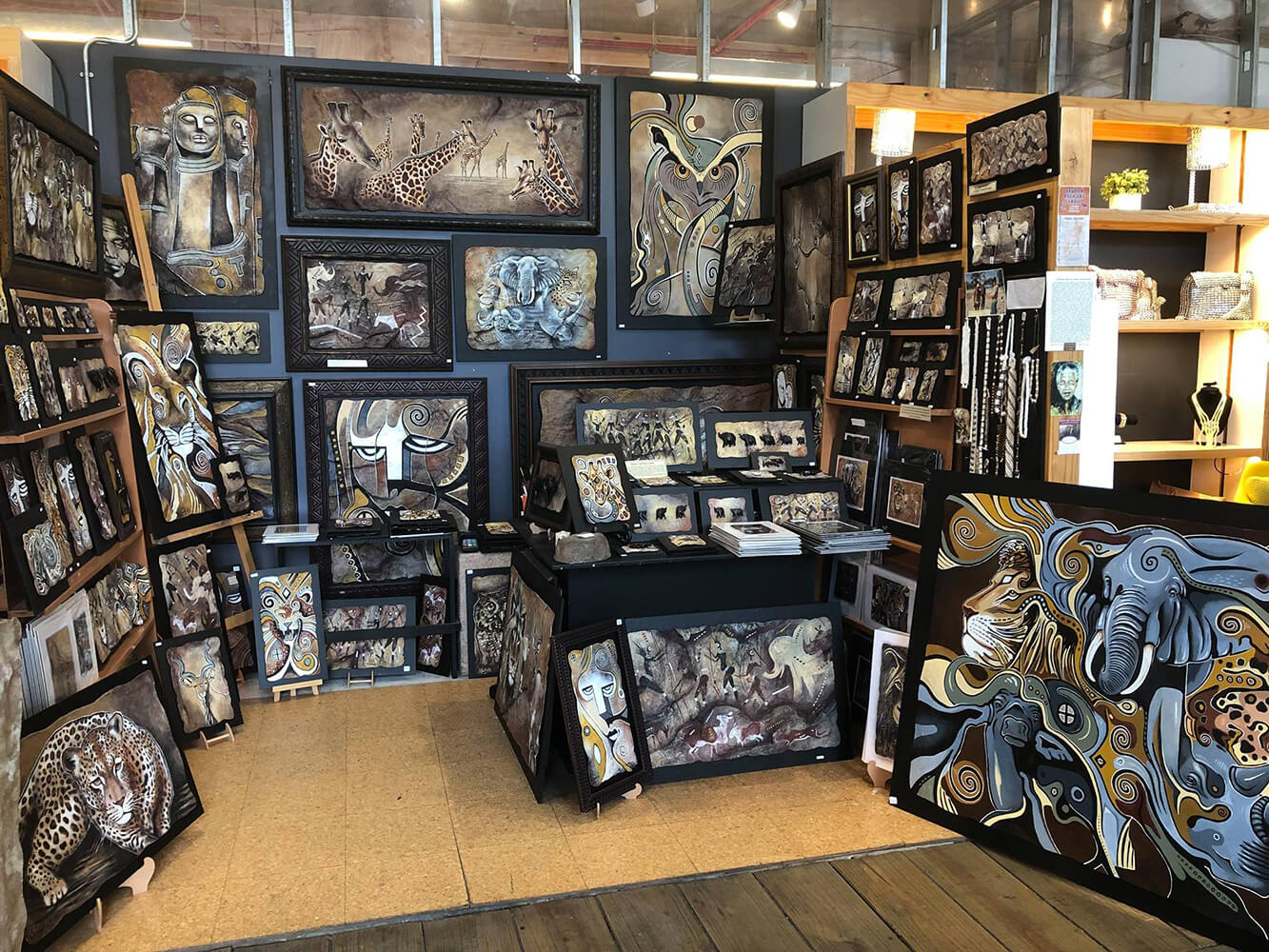 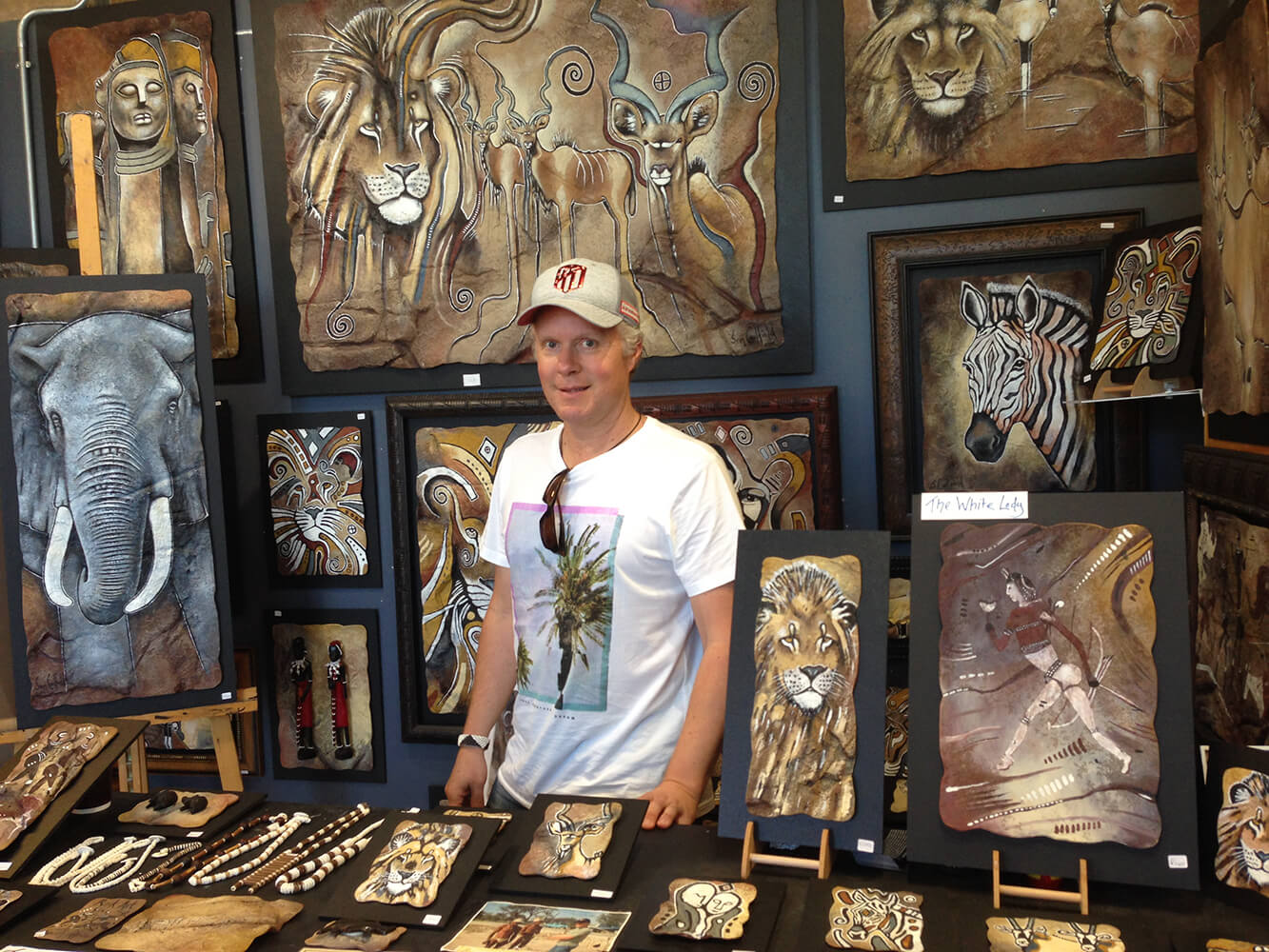 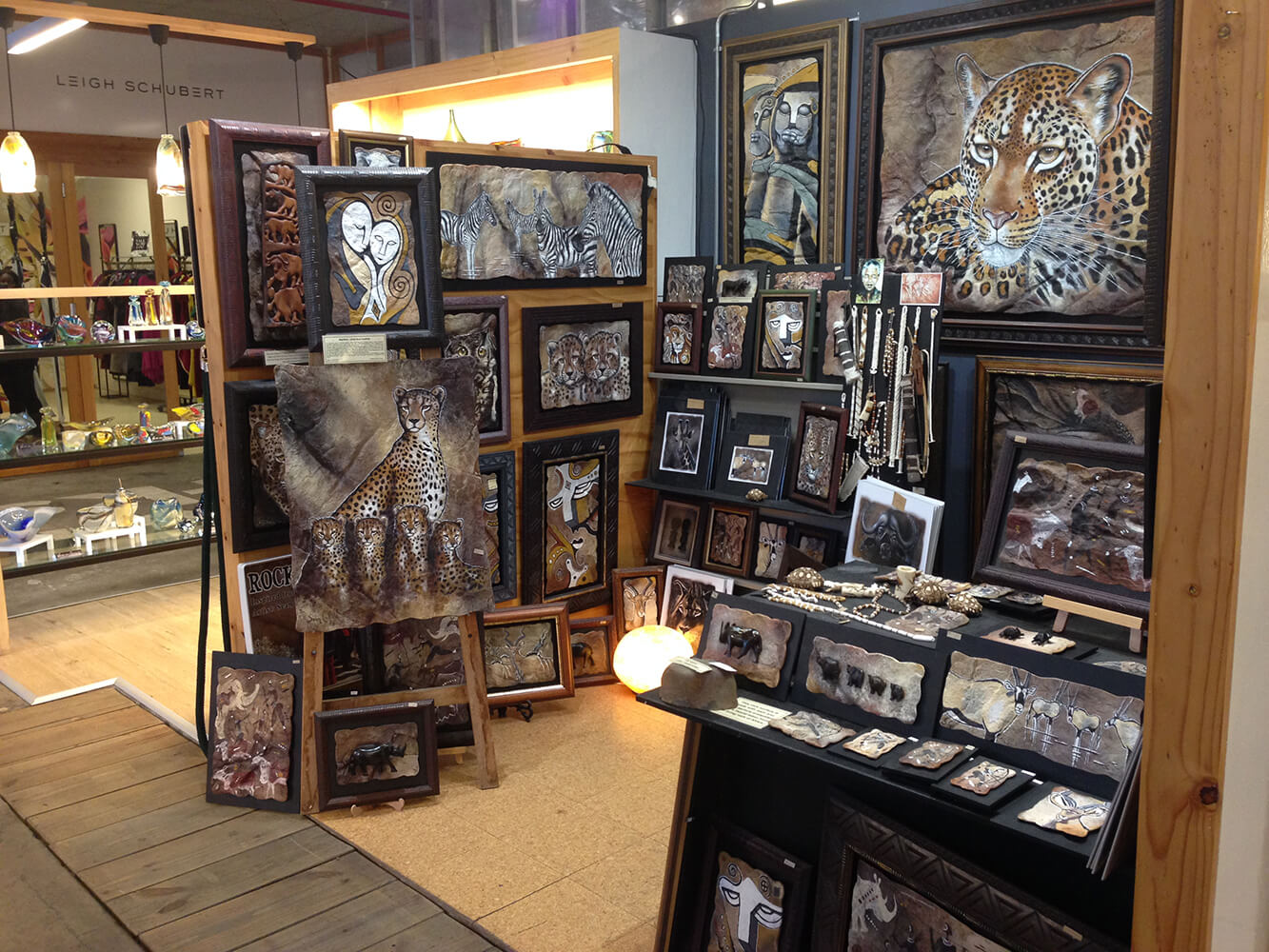 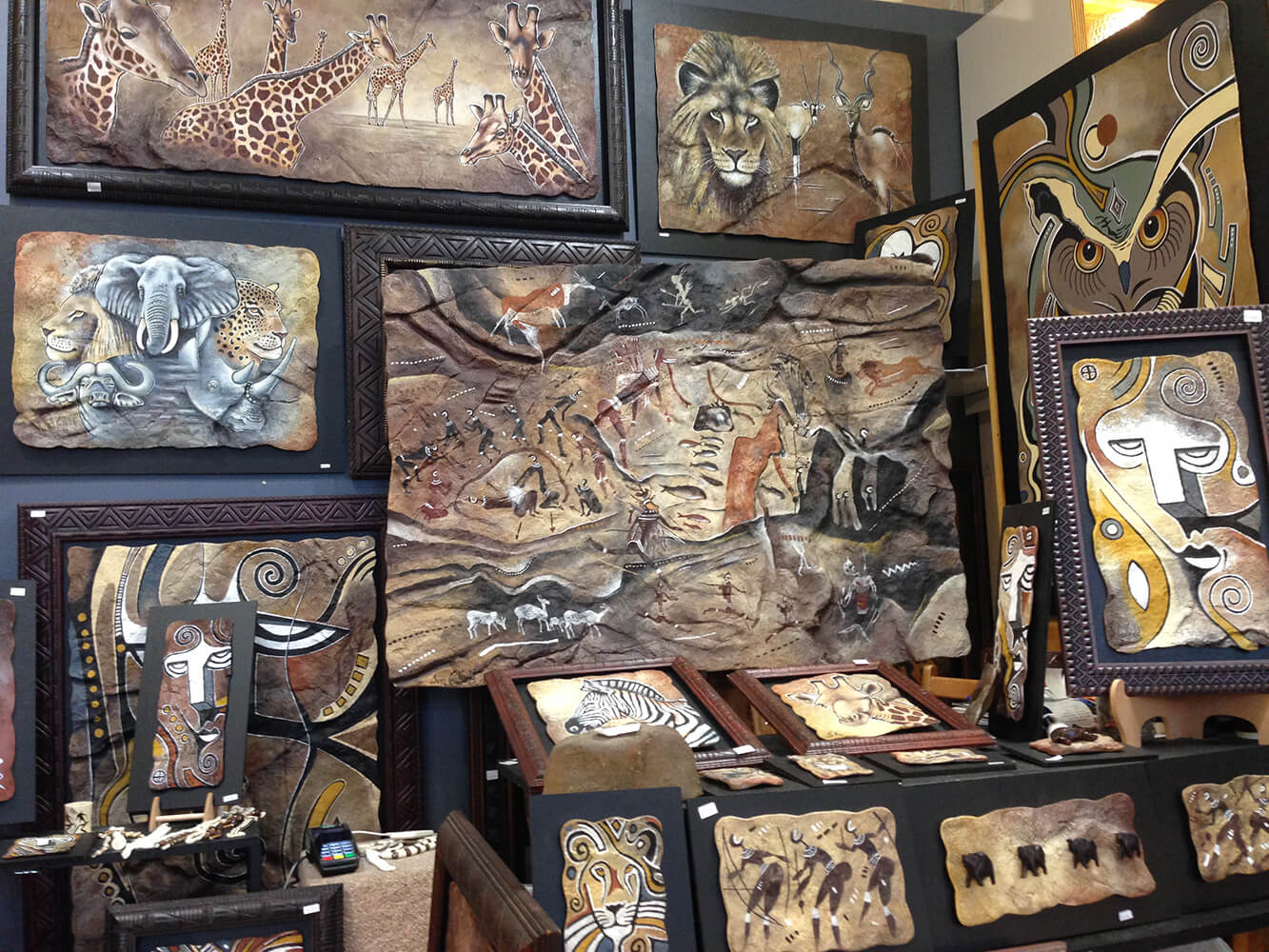